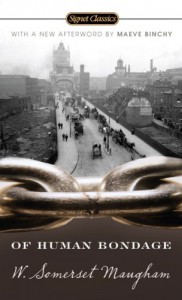 A meandering story of the life of Philip Carey. The plot is not important as Philip's discovery of the meaning of life. And by meaning of life, I really mean lack of meaning. And while that sounds quite dank and depressing, it really is quite a liberating thing to know and accept your role in this world. Of Human Bondage popped on my radar as it was mentioned in a review of recently read The Swerve as a literary example of Epicurean philosophy. Without that context, I probably would have been saying WTF Philip and giving this book a good head shake. Instead, I was able to relate to some of Phillip's foibles. Phillip was not a particularly likable character, but he had a bit of a Dickensian childhood, born with a club-foot and orphaned, so you wanted to have some empathy for him. Still, he didn't have things too bad, and was able to try out a few career paths before ultimately settling on becoming a doctor. But Phillip was an outsider, never quite embraced by gentlemanly society due to his deformity and modest means, yet he did not identify with those of abject poverty who literally live hand to mouth. As a modern American, I don't truly understand what it means to be a "gentleman" in early 20th century England, but I do understand not being embraced by certain peer groups.

Worth mentioning is the relationship with the mega-bitch Mildred. Phillip knew his obsession was unhealthy, he knew Mildred treated him like shit, but still he gave into it, and seemed to be masochistically drawn to the abuse. Honestly, I don't quite understand how it conceptually tied in, but I found Phillip's obsession with her interesting especially so since he was so emotionally disconnected with others.

I am not clever enough to pull out that one plum of profound meaning from OHB, so I take the journey of reading as its reward. In spite of Philip's flaws, the book's wandering storyline, and awkward ending, OHB is a lovely read and one that will echo in my psyche for a while.