Maddeningly good and an excellent example of good journalism transformed into a very good book.
Not always the case as I found in this example https://www.goodreads.com/review/show/1567538899
(show spoiler)
Having lived through the LA riots in 1992, this hits home. These detectives are unsung heroes and it's slightly embarrassing to learn that their work bears little resemblance to their literary counterparts found in popular fiction. I felt outrage at the dearth of resources available to them, especially when the Los Angeles seemed to give birth to the 'militarization' of police forces with such gems as this battering ram. 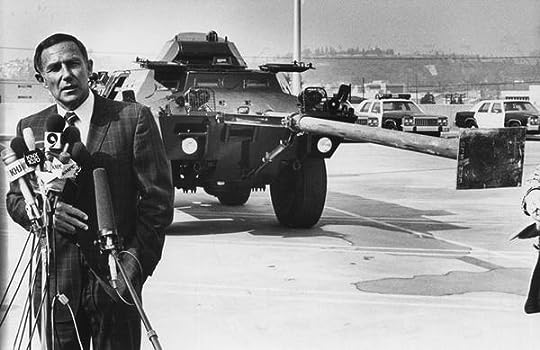 Oddly enough, Daryl Gates is conspicuously absent from these pages. Even though Daryl Gates was long gone before the setting depicted in Ghettoside, law enforcement public relations still was important. Crime prevention was priority, solving crimes that were isolated to marginalized groups clearly was not.

A couple of years ago, I read an interesting book that examined the sociological/anthropological roots of violence where most things boiled down to "team aggression against an outgroup". If that doesn't sound like gang warfare, I don't know what does. While Ghettoside cites the root of the problem, it doesn't make it the agenda. Rather, she basically stipulates it as a given for the time and place being presented and uses it to present the heartbreaking story.
real life book club 2016 bookclub-2016