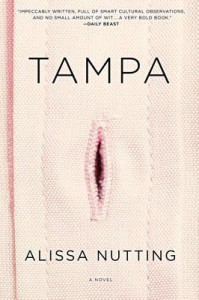 1 ½ stars. Tried too hard to be shocking that it forgot to be interesting.

For all intents and purposes this book is a one star. However, I am generously adding a half star and rounding up for reasons that I will explain further on. In general, this was me reading Tampa:

First, let it be clear that this isn't a one star because I was horrified at the subject matter. After all, I have read Father Figure, and that had 10 times the creepy factor. I like to take on challenging reads to explore what happens when something goes wrong in a human. It can be interesting to observe the twisted, rationalizing and often inventive thought processes of those with personality disorders. Tampa had a terrific concept, the portrayal of a sexual predator where the victims are adolescent boys. In fact, such boys are jokingly called lucky instead of victims. However, it does happen and these so call lucky bastards can suffer as a result*.

Instead of a nuanced exploration of a woman attracted to adolescent boys, we got a very one dimensional character who was all about catching her prey. When we first meet Celeste Price, she has arranged her life so that 1) she lives comfortably and 2) she has lots of 15 year boys around her. As the school year begins, she sets in place her plan to cherry pick a boy to be the object of her desire. No second thoughts, no conflicted feelings, no self-doubt, no attempts to change. I felt like the author wanted so bad to shock her readers, she relentlessly threw at you this sort of barrage: "I WANT SEX WITH BOYS... I HAVE SEX WITH BOYS... EVERYONE AROUND ME IS STUPID... AND UGLY... I AM SO BEAUTIFUL... MY HUSBAND IS STUPID AND RICH..." (the caps are intentional, it just felt that way). I kept waiting for the other shoe to drop, for something interesting to happen, and it really didn't and I was left feeling like this

Much is made of Celeste's beauty. Certainly she uses it to her advantage in seducing her teen boys, that's understandable. However, my head exploded when her attorney literally said "your honor, my client is too beautiful to be in the general population of jail." Granted, I am neither a judge nor a lawyer, I haven't even managed to get past voir dire to sit on a jury. But I am pretty sure an attorney wouldn't say that their client is "too beautiful" to a judge, or if they did, it would be in code. After a little poking around, I learned that Tampa’s protagonist was modeled after a real life boy chasing beauty, Debra Lafave. And her lawyer didn’t exactly say she was too beautiful for jail, but he did say "To place Debbie into a Florida state women's penitentiary, to place an attractive young woman in that kind of hellhole, is like putting a piece of raw meat in with the lions."** So the extra half star is awarded to this book for the author trying to keep it real. And guess what, she got house arrest and probation. Too pretty my arse.